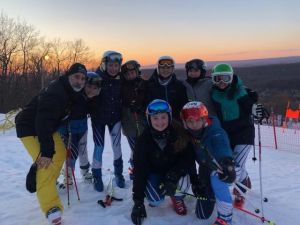 It was an impressive Friday night race for the Sparta High School Alpine Race Ski Team on the Kamikaze race trail at Mountain Creek. Just a day after our giant slalom race was rained out and postponed, the Sparta Ski team was eager to race and their race times speak for themselves.

The adrenaline will be pumping this entire school week, with back to back races approaching. Our last conference Giant Slalom Race will take place on Tuesday night Jan. 29th at 5pm. On Wednesday night Jan. 30th at 5pm the team will compete in our first Slalom Race of the season. Finishing off the week on Friday Night Feb. 1st at 5pm, 8 boys and 8 girls on the Sparta Alpine Race Ski Team will be competing in the thrilling Dual Slalom Varsity Invitational race.