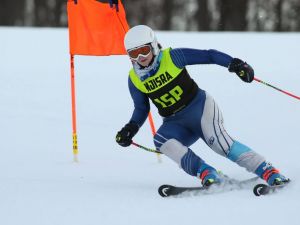 A little insight about the character of this years ski team: While all the other high school race teams darted for the warmth of the ski lodge when their race was over, a group of Sparta Ski Team racers made their way back onto the freezing chair lifts up to the mountain summit to cheer on their teammates taking their final slalom run. Not even when the last Sparta ski racer descended the mountain did our racers leave the frigid 3 degree mountain top with wind chills below zero. Instead they chose to brave the arctic cold for another 10 minutes, and cheer on the balance of the other high school JV racers and X racers until the very last racer left the starting gate. They picked them up by chanting first names giving them a warm and enthusiastic send off. Now that is what I call pure love for skiing and great sportsmanship. Right On Sparta Ski Team!

Now onto Slalom training and tighter turns. This Friday Night Feb. 1st at 5pm, 8 boys and 8 girls on the Sparta Alpine Race Ski Team will be competing in the thrilling Dual Slalom Varsity Invitational race. To view the racer lineup click here https://www.spartaski.com/events.htm

Sparta Alpine Racers You Make Us Proud. Keep it up !