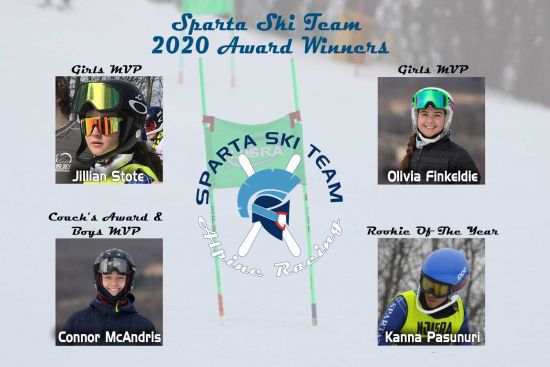 Congratulations to our 2020 Award Winners. These students are all talented athletes and powerful racers. Never losing hope, perpetually working hard to improve their technique and always giving their all.

COACH'S AWARD: Connor McAndris
This award has nothing to do with race time results, but everything to do with commitment, concentration, responsibility, positivity, leadership and drive. This award goes to the racer that never missed a practice. This racer made the Sparta Ski Team their priority, 24 hours a day, 7 days a week, every day of the year. This racer demonstrated all the traits a coach seeks in a strong captain. Thank you Captain Connor for you assistance this year, in leading our team and being the captain I knew you would be. You made this season special for all of us.

GIRLS TEAM MOST VALUABLE PLAYER: Olivia Finkeldie & Jillian Stote
This year’s Girl’s most valuable player is a team leader, she has USSA experience and holds NJ All League status, she has raced Varsity all four years, she has recorded endless first place finishes and she has been the key factor in our girls teams repeated podium victories, championship wins and overall success. It's A Tie! This year, the Sparta Ski Team had been blessed with not one but TWO MVP’s, each a master of their own discipline. They have repeatedly led our ski team year after year and raced like true Olympians. I am very proud of both of these girls. This year they truly stepped it up, not only did they compete strongly, but they motivated and led the entire team to reach the podium. Congratulations to team captain Olivia Finkeldie, ruler of the Giant Slalom Course. And Congratulations to Jillian Stote, dominator of the Slalom Course.

BOYS TEAM MOST VALUABLE PLAYER: Connor McAndris
It was because of Connor's leadership and triumphs that we had gone this far. Connor proudly delivered a full send at that Petro race and had his best race of the season. He raced with passion in hopes of leading the team to the State Championships. He finished first for our team and of the 83 high school racers competing in the race that day, Connor took a most impressive podium third place. Connor was our top dog this season, consistently fast, reliable and inspirational. Certainly deserving of the boys most valuable player award, congratulations to team captain Connor McAndris.

ROOKIE OF THE YEAR: Kanna Passunuri
Energetic, charismatic and hard working. Routinely contributing to our varsity ski team race time, this new racer quickly fit in with our ski team and became part of our family. Kanna is a young alpine racer with a great future.