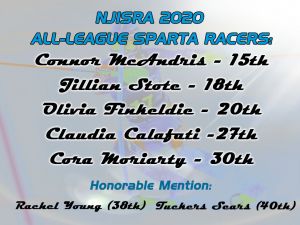 The top one third of NJISRA high school ski racers are honored with the title of "All League". We are proud to announce the five Sparta ski racers that were recently named "All League" for the 2020 season (Top 33%): Connor McAndris, Jillian Stote, Olivia Finkeldie, Claudia Calafati and Cora Moriarty. Named "Honorable Mention" (Top 40%): Tucker Sears and Rachel Young.

Seven Sparta Racers To Compete In The Race Of Champions

Each year, varsity ski racers compete to earn individual points, racing in six scheduled conference events for a total of 12 individual races. A 20-1 point system is used for the boys and 15-1 point system for girls. Example Girls: 15 points awarded for a 1st place finish and 1 point awarded for a 15th place finish. The lowest two individual race point results, after the season is completed are dropped before the final total is computed - Best 10 out of 12 races. This year 43 girls and 46 boys qualified to compete at the Race Of Champions.

These seven athletes have all qualified to compete at the Race of Champions. The ROC is the final race of the season to determine the top 12 boys and top 12 girls to be named "All State" and to join the NJ Ski Team and compete at the USSA Eastern Regionals High School Championship in New Hampshire.

Congratulations to all these exceptional athletes and best of luck in the Race Of Champions on Monday February 24th at 10am at Mountain Creek South.