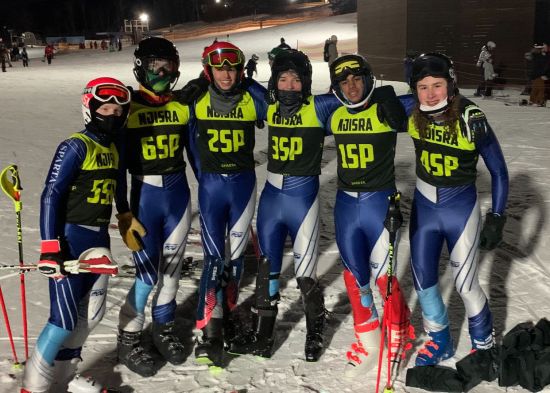 Knowing where you are on a racecourse is critical. The top alpine racers are always looking two gates ahead. Yesterday's race proved if you let your guard down and fail to concentrate on the second gate, the course will win. The minimal course set with just three vertical combinations packed a punch last night. What should have been the easiest race of the season, tricked up many racers just over the first knoll where a delay gate was set on a diagonal just under the prior turning pole. Having been tipped off by a referee to carefully inspect the setting of the delay gate at the top of the course, it was the first thing our ski team looked at during the inspection. We pointed out the proper passage line, planned to be off the single-pole blue gate prior to the delay, and to enter the delay gate on the top gate. Sadly, in the heat of the moment, too many racers mistakenly turned under the single-pole above the delay gate and some turned immediately at the single pole and failed to cross the gate line of the delay gate. The most basic combination gate ended up being the most difficult and it disqualified three of our racers.

When you only have 6 racers on a ski team, and just the top 4 count, you rely on all to finish no matter their time. It was disappointing to see our chances quickly fade after the first run was over and three of our racers had either disqualified (DSQ) or did not finish (DNF). We were looking at taking on a ghost time before the second run had even started and settled for a 5th place finish. Fortunately, we had two back-to-back fast runs from top ten finishers Madison Campisi and Aubrey Zimmerman. Captain Cora Moriarty's strong second run helped the girl's team, but the fourth racer ghost time would prevent us from achieving podium. Sparta girls finished with a team time of 7:23.20. Ridgewood won the race with a team time of 5:31.77, followed by Mountain Lakes taking second with a team time of 5:38.47 and Wayne Hills taking third with a team time of 6:05.87.

Congratulations to Julia Mooney for taking 1st place once again in the girl's JV race.

Mark your calendars, our next conference race is Thursday, Jan. 27th at 4 pm at the National Winter Activity Center.